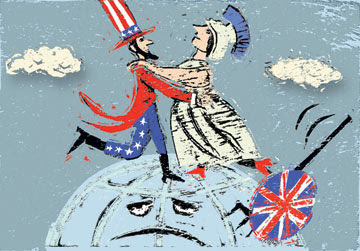 In the 2004 US presidential elections ,every City with a population of more than 500,000 returned a majority for John Kerry. How well do we really know the land of the free ,which incidentally contains a lot more wilderness than Africa ?
Well ,I don’t do ‘abroad ’ much, but my slumbering curiosity started like a fawn, when Obama’s coronation champagne was put back on ice, last week.. Gallup polled likely voters, 49% McCain , to 45% Obama. Republican adverts juxtaposing "the one”, with Charlton Heston, as Moses parting the Red sea were blamed so it seems that even Americans detect a soupcon of pretension in his grandiloquence . Mr. Oh oh oh Ohbama was typically restrained on his own victory in the Primaries ....“This was the moment when the rise of the oceans began to slow and the planet began to heal“ . ..pass the sick bag eh....
In a country where planting placentas under a tree ( like Mathew McConaughey ),is all the rage , you wonder if satire is legal ,but apparently it is . The suggestion slinks abroad, that while Obamah,may be the messiah, he may equally be a very naughty boy, and ,whisper it softly , ever so slightly bonkers .This ever-so-slightly-bonkers, affect is toxic .William Hague had no defence when Blair flung his subtle jibe, “Weird weird weird “. Not exactly deathless wit ,but allied to a penetrating glance at Ann Widdecombe and John Redwood , it was deadly .Now Obama quails before the loon detector .
We have presumptuously misjudged the colonials once again and I blame the old ‘separated-by-a-common-tongue’ thingummy-jig. With no gabbling foreigner to put us on our guard , we dive straight in, without checking the depth. True, we get their TV, but the thing about TV, is that its fiction .What Bill Bryson called the ‘wide open mental spaces of middle America’ are a penumbrian mystery.
(How Different Are We? -US versus the UK by stats ( from The Economist 2002):Opposed to unlimited right to abortion 46% v 17% -Proud to be American /English 97% v 76% -Taxation is “too low”/ Support for higher taxes and public services 1% v 62% (2002!)-Believe in the devil 45% v13%-Support ban on possession of hand guns 32% v 83%-People earning 40%or Less of median income 14% v 5% - Millionaires per hundred 0.74 v 0.58 -Gun deaths per 100,000: 10.6 v 0.3 -Average Executions per year -(97-2001) 78 v 0 -Defence spending per cap $1059 v$576 -Govt. spending as % of GDP 30 v 39, Now 45 ! , )
OK so we are different .Take Bush.. It is , (isn’t it ? ) ,a truth ,universally acknowledged ,that his Presidency has been catastrophic . Certainly mistaking imam ridden Iran, with Danes and German waiting to get on with democracy counts as an oopsy daisy ,but ,overall , America has fronted up to worldwide Islamic aggression and we are safer for it . From UAE to Indonesia to Pakistan , states ,previously supportive of jihad have caved in before the implacable cowboy . He successfully de-nuclearised Libya , then Syria and now North Korea . While Europe talked Iran built bombs , can anyone doubt what would happen without Bush or a similarly decisive President ?. Does anyone think Israel would take the first hit ?
The US has suffered relative decline but only because of the benign explosion of allies China , India Brazil and the like , none of them expansionist , it makes them richer . The problems are the non trading oil bubble countries like Putins bullying Russia , but I digress… My point is that the Euro line on Bush is not necessarily the way Americans see it ,even if they say they do. Something like this happened to John Major in his triumphant first election.
I fervently admire America ,but it has its own stride which is not mine . Brown tried copying tax credits . He neglected the very differing role of tax returns in the respective countries with disastrous consequences . Cameron is much impressed with the Wisconsin welfare to work programme ; let us hope he bases policy on the idea and dumps the script . Charles Moore complained that Thaler`s “Nudge” gave away the punch line in the title. He suggested “Yank” for uncritically importing ideas from the US ,but Labour`s right are most in need or the warning. The fragmented “Project” veers wildly between Yanko-philia and Euro-besotted ness ,we must avoid both Scylla and Charibdys .Try doing American neat,here , and you will find yourself standing before a horrified Labour Conference in Sheffield shouting ““ Aaaalright ! “ ..with the loon detectors twitching off the scale .
Posted by Newmania at 2:21 am

trust me when i say we have our significant problems here...seems the more we try to advance the nation (or that is what politicians call it) we end up taking away from the citizens of this country to a point where there is nothing left...i have always believed you have to consider long term goals amoung the short term but it seems anymore they are just putting plasters on problems and not doing what needs to be done to heal this once great nation...imho

Quite so Daisy , quite so

Prefered the original headline, Mr M, and you've set up "OK so we are different" very nicely, but in the words of the prophetess

that don't impress me much (uh-uh huh-huh)

I absolutely deny lazily dissing GW. I cut him enormous slack, right through 2003 - losing friends in the process - on account of high regard for his father (under whose carefully- fashioned coalition banner I served in a modest capacity in 1990-91). All because I hoped some ends would be achieved that might - just - justify the often highly dubious means.

But no. We had the right to have expected better, cleverer, more successful outcomes given the position of unrivalled strength he inherited. Labelling him the Implacable Cowboy is a delightful piece of Disney-rhetoric to jocularise, excuse and otherwise airbrush this record of strategic under-achievement.

At the Final Trump, the charge against GW will be the same as that against Blair and Brown: you had every advantage imaginable, and you pissed it up the wall.

But Nick, he did the basics , after 9.11,he went out and kicked some butt and really that was the main point ,. Could have gone better but from the point of view of our security he did the right thing.
Obama would be softer on Iran .... does that make you feel safer ? Not me , with GW the axis of evil knew they were getting no change .