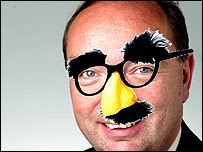 This is the picture of Norman baker our nauseating local MP I found . He is one of theose MPs who is busy doing nothing . Thanks to Flo for pointing out his pointless trip to Tasmania to comment on the Rainforest there. We already know about the silly and lucrative book and his support for faddy causes like Animal Rights.If he has ever done anyhting for Lewes I am yet to hear it. Typically despite a life of far left opining he has clung onto bookies favoutire Nick Clegg...Fancy...
Posted by Newmania at 10:37 pm

Let's start with Mr Baker's 'Westminster Update' in the Sussex Express on 30 November.

This was 100% devoted to parking issues in Lewes and not a mention about what NB is doing for his constituents at Westminster.

The conclusion must be that NB has now become a part time MP and full time conspiracy author.

This is not good enough.

Well I don`t know that commenting on local Parking issues is altogether a bad thing anon. I do find it odd that he is allowed to propogandise in the local Paper without anyone mentioning what an absurdity all this is in the light of anti car Liberal Policy..in afct that e shoud have such a platform at all

He's an emptier suit than most

My impression of him is that is a bit odd Richard. Thanks for looking in

I wouldn't know if this chap is a waste of space or not N but I do agree with saving the rainforests. Sorry to sound a bit 'worthy' and it's most unlike me to be fashionable sounding but I really do think there's stuff that's evolved in the rainforest, natures kitchen, that we cannot recreate and should study. They are the lungs of the Earth, chopping them down at a rate of knots then fretting about travelling by air or boat on holiday is just plain daft.

One supposes that the thread of the original posting and subsequent comments centre around whether Norman Baker is now seriously 'on the slide'? He may be now that he has 'trousered' Tens of Thousands arising from his book about Dr David Kelly.

It just does not feel right that Mr Baker is lining his pocket at the expense of those who elected him. He was quick to try and spot a 'part time' MP in Lewes before he was elected in 1997 but he now seems to have fallen into a similar trap.

Instinct suggests that Mr Baker has the common sense not to stand at the next General Election and so thus avoid considerable humiliation.

Phippipa if wringing ones hands at the tax payers expense made any diffrence I might have some time for it .


Anon , there is no chnace of Baker giving up his part time job. ...Sadly

60% of Rainforest is in Brazil and the rest lie along the equator in places like Columbia, which is also a good place for growing illegal drugs so..

Don't bomb Iraq, a hostile takeover of S.America would save the rainforests and solve the drug probs in both UK and USA. The pharmaceutical companies would be willing to invest with all the (legal) opiates they want. Great place for research too. Sounds pretty sensible to me - what have we actually got out of Iraq? And we're going to be bleeding money into that country forever it seems!

It just does not feel right that Mr Baker is lining his pocket at the expense of those who elected him. He was quick to try and spot a 'part time' MP in Lewes before he was elected in 1997 but he now seems to have fallen into a similar trap.


The other anon - aka Flo - just so you know which is which, n