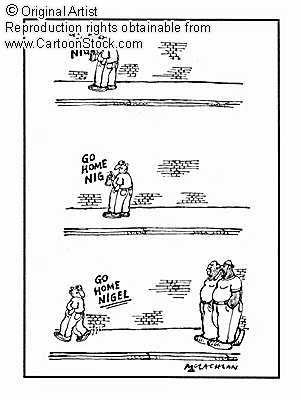 .During thelast three months’ local by-elections the BNP have fought eighteen seats in total, winning an average vote share of 14.9%. The Greens have fought fourteen, winning 6.7% on average.(1). The Liberals as I recall were last seen on 11% in ICM Polls and the BNP nowhere.Clearly there are great problems in extrapolating anything from this and I do not mean to but the difference is striking.

Its an interesting thought that the BNP might become as popular as the Liberals. I wonder if they would be afforded equal for television exposure as the main Parties as , mystifyingly , the Liberals are .
I regard this as a deplorable development brought about by progressive insensitivity to local and national loyalties a step change Immigrant numbers and ignoring the differential growth of non English ethnicities. Tensions understandably centre on housing where the whites rightly suspect that importing neediness ignores their prior claim via the points system . (2) . We did not need to be here. There is no evidence of any wide spread racism in working class areas (3)
It would , however ,be a test for the BBC .It is not really pro Labour as much as pro “Progressive” Liberal big government social democracy. This is not always an entirely malign bias , but on Europe , immigration , N Ireland , abortion , religion and range of subjects the unconscious editorial view is plain. How would they reconcile a commitment to minority representation by which they favour the Liberal party with the rise of Parties inimical to their deepest unspoken convictions.
Tempting though it is to watch them writhe I hope a little common-sense is applied to immigration and multicultural error before we reach such a point

1 See Political Betting
2 The lower middle classes face similar battles getting the government admit that exploding house prices are caused by immigration, it is like pulling out a tooth but we are getting there. Rates of replace are down to about 1.4 and this is caused by house prices and the ratio of dual incomes to mortgages. Clearly this would soon right itself but cannot with immigration filling the gaps and more

3 In fact the reverse is true with many Liberal white middleclass families unconsciously excluding blacks from the Dinner Party table where they discuss tolerance . The working classes simply get on with it.

"In fact the reverse is true with many Liberal white middleclass families unconsciously excluding blacks from the Dinner Party table where they discuss tolerance . The working classes simply get on with it.

You know, yours is an excellent blog, fab, but is it just me whose getting bored with politics? What I mean is the endless spin and bitching - balls and... well, Balls. The 'Tony said this and Gordo said that and a friend of Tony's was soooo rude and I've supported Ming till I stabbed him in the back and I won't do interviews or talk about drugs and Gordon's a moron, he bottled it, didn'tcha Gordo, na na na na nah'..

..while the country's going to the dogs. There are rats brazen in the streets (remember the Black Death?) and people are dying in this cash rich NHS. Our borders are are joke, there is effectively no control. Our prisons are overcrowded and innocent people have more to fear from the police than burglars do especially if they admit to having Anglican Christian belifs. (remember the Anglican protestant church? We kind of invented it but it's safer to be a muslim nowadays) You put your savings in a bank and pouf! They's gone. You save in a savings club for xmas and pouf! savings gone. You save for your old age and it's either taxed away before you die, grabbed by the State to pay for a care home or taxed away after you die. State lesson? Don't save.

Does Mike Oldfield have a point? Is it time to leave?

You should read Geirge £Walden`s 2 Time to emigrate 2 Phillipa ..thats a superb comment by the way which is worth a post on its own ...

I a bit bored with poltics actually and I am going to do less. I am also intwerested in books and music and films and all sorts

I think the Lds are going to end up next time with less seats.

But I can't see the BNP ever winning large numbers- one or two on high water tide at most.

Hope so Ingsoc , I cansee a place for a nationalsit wiorking class party , but not a racist one . Anti excessive immigration , yes by all means

That's it isn't it N. There isn't a nationalist political movement which isn't tainted with racism. Even the English parliament and St George's day campaigners are usually using those issues as cover for a covert "white supremacist" campaign.

Nationalism of any sort is tainted ed by the experience of the 20th century....it is in many circles thought if as a dangerous evil. UIndeed in excess it can be .