Life Goes on Under Emperor Brown 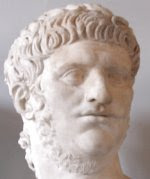 As I sit nervously wondering how things will pan out down Ealing way I am still riven with disappointment that “Mock The Week” which started so well has now drooped flaccidly into bashing the Conservatives and the Monarchy in lieu of a ”Muvver in Law“. In ten minutes they created endless hilarity by guessing the sentence behind the words C.S.I.P superimposed on a picture if the Conservative leader .Hilarious suggestions included the hilarious Cameron is Stupid Inbred Prat “ , the hilarity continued until the truth (Slide in Polls ) was hilariously revealed . Then it was onto some dog eared Boris Johnson Material and downhill from there. Shame really there are some talented writers involved but we are clearly onto the B gags after only two weeks. It has often been remarked that the BBC are biased in the current affairs but far more so in the cultural output when the world that cares is not watching. A bad week for the Beeb all round and a Poll tax for slabs of cooking programmes and execrably drab drama seems increasingly anachronistic.


The Speccie is blooming and it contains many nuggets including a fascinating piece by Fraser nelson which answers a riddle I have been teasing at for a week . How can gay Gordon move to the right so effortlessly and yet retain Union support and left progressive loyalty ?

The Telegraph coincidentally has an Editorial “ Brown Moves Right ticking off the signals . Reclassifying cannabis as a class B drug , shouting boo at Russia, burying the super casino and dropping the “presentational” style Blair specialised in This embellishes the theme begun with dropping targets for Hospitals and supporting Academies .Pretty Conservative eh and yet not a murmur from the left pourqui ?

Well partly it is because Gordon has such a long record of left wingery that they trust him to say whatever it takes to get elected and then change direction sharpish . To just that extent we should not trust anything he says now but something a little more sinister is going on behind these eye catching initiatives .
Blair was not allowed to fiddle much at home but when Gordo`s back was turned he hatched a little commonsense .

The shy delicate creature was only at the infant stage . But, 1% of the NHS budget is in the hands of outside medical companies and there are 47 Academies ( out of 3300 Secondary schools ) . He had learned as all men do eventually , that government diktats were useless and competition worked. Brown is quietly killing the baby in its sleep .Its so easy ….just stop feeding it . In the Brown Imperium Sussex NHS trust has cancelled the contract for BUPA`s clinic and other similar moves are afoot in Cumbria . The word is out that these private gestures are no longer protected . Naturally the local Commissars will quickly do the rest .
The same is true of City academies . Under new rules the they will lose independent curriculum and come under greater control by Town halls . Town Halls have always hated them and though the name continues the programme is dead

There are plenty more example of how the Scottish Emperor sends signals to his legions of left sprites and demons that feasting time on the public purse is coming back. The truth is that Brown is as much of a liar as Blair , the problem is he is much much better at it .

When is someone one going to give the Mazola Milliband a proper interview. Andrew Marr all but popped Foreign Secretary’s little feller into his fleshy gob for a moments executive relief so adoring was he . Sorry …anyway in the New Statesman he is up to his usual apple for teacher “ What I did on Holiday” style of cobblers. This is typical of the polluting offal he specialises in
“..But the EU was founded to tackle threat that no longer exists ; conflict within Western Europe. If it is to renew its mandate it needs to find a new raison d`etre including , I believe , a focus on addressing climate change. . Creating an Environmental Union is as big a challenge in the 21st century as peace in Europe was in the 1950s “

Anyone who has got this far you may return your jaw to its normal position in your own time . What is he talking about ?


The New statesman has an interesting view on the IDS family initiative including a startling statistc from Frank Field “ A lone parent with two children under eleven , working sixteen hours weekly on minimum wage ha d an income of £487 per week in 2006. To get the same a couple had to work 116 hours .” The Statesman accepts that Labour Policy has been anti family for ten years… however it demurs at the Premium proposed of £20 per week for marriage as it may also help better off people. IDS wants ‘to shore up marriage in its heartland’ and hope that the signal will trickle down to other sectors who will be encouraged to see marriage as a social good . Of course they have found an inelegantly expressed paternalist sentence and scoffed at the idea the poor might learn from their betters They are not however able to address the way to reverse the damage and avoid another means tested disincentive . To some problems the New Statesman turns Nelson`s eye and always will.( Thats Horatio , not Mandella BTW)


There is a lovely article by Boris’s father in the Spec offering a couple of anecdotes and some mild advice of the “To thine own self be true “ variety. His pride in his son is marvellously present and it is really touching to see him strive to be modest and light when he clearly quite rightly bursting with pride at the achievements of our future Mayor . Incidentally Newmania Senior once got drunk with Johnson senior andd others at the Party Conference and reports he is the best of eggs .

PS the Freedom Association bash was a ball with a pretty young Conservative who , I gather got kicked of a reality show , giving a disarmingly fresh talk and much robust discussion to follow.
I ended the evening , tired and emotional . All a bit young for me really but the mercurial wit of Croydonian is always worth attending to. Devils Kitchen very generously explained how the world would be a better place if we all took drugs and scrapped the NHS or something ….and yet the world remains stubbornly no more put to rights that when I last saw it .
Posted by Newmania at 11:28 pm

always liked the idea of the freedom association - was there a smoke-free bar?? :-)

It wqs at the " Old Bank Of England" in Fleet Street ED and i daresay a youthful chaop like you would have fitted in well. I mostly went to say hallo to Croydonian.

Some exceedingly winsome gels in evidence though

Bloody Londoners get to go to all the best parties. Hmph.

That was in the New Statesman P ? Not a right wing organ