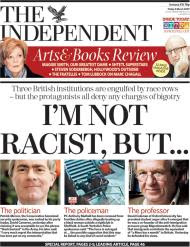 On the front of the Independent this morning are the deathly faces of Professor Coleman, PC Anthony Mulhall and Patrick Mercer under the Headline “ I `m not racist but ….” . In the case of Patrick Mercer he volunteered the suggestion that, being called a ,“black bastard”, was part of army life . I `m sure it is; armies are about killing and being killed ,and a visceral bond has to be formed among the comrades in arms. A little harsh language along the way is to be expected, and the same men would , if the training works , be required to die for their supposed adversary.
PC Mulhall`s case is somewhat different, in that he appears on CCTV using quite sickening violence against a woman of ethnic origin. Beverly Jameson the coordinator of South Yorkshires` Black Police Association said “ When you saw the whole footage thing young lady is thrashing about violently and in ganger of hurting both herself and the officers trying to restrain her. She committed a criminal act , that was the catalyst it had nothing to do with race.” . Well good for Beverley.

Professor Coleman I blogged on Yesterday questioning his membership of the Eugenics Foundation the Galeton institute. I am reassured to discover the involvement of Prof Steve Jones and conclude that modern Eugenics has nothing to do with the Nazi and Socialist horrors of the past. He is a respected academic whose involvement with Migration watch has expose the Government’s lies to great effect.

The left however are not likely to be put off the scent, and Mathew Paris in the Spectator explained why. Having ditched Socialism , moral foreign policy , state provision ,, and everything else the Labour Party once believed in, the vague assertion that the Conservative Party are ,“ nasty”, is all they have left to hold them together.

Martin Bright in the New Statesman today described the Conservative Party as ideologically uncertain , unsure of a direction for the 21st century and with a leader tarnished with a serious of poor decisions”…..only in the NS eh , breathtaking swizzle headedness, but what a good description of the Labour Party.
The antennae of the left for a wiff of “nastiness” are therefore set to maximum sensitivity . This for example is the manner in which he describes David Cameron signing up MEP`s to the “extreme Euro sceptic movement” … worthy of the craziest days of the Tory wilderness years and “ Anti Europe “ and anti immigration. Anti immigration of course equals , racist, to the left.

That is why David Cameron has had to act decisively over Mr. Mercer. It isn’t fair but he’s in politics and should have known better. The horrible truth is that the Labour Party believe their own lies. How else can we explain disastrously flooding and unreformed NHS with tax booty unless they really believed the Tories were trying to starve it to death?

As the sage said , when men cease to believe they don’t believe in nothing , they’ll believe anything. That is the position of the Labour Party and that is why these minor scuffle loom so large
Posted by Newmania at 9:48 am

But seriously, 12 years ago I was an ASLEF Union rep (train drivers') and went on a course. There was to be no gender specific language, and no use of the term 'common sense' as no such thing exists apparently. All of this was said in jest... but with a slightly menacing undertone.

Five years ago I did a government approved course on Assessment in the Workplace (D32/C25). This, for the most part, was about how to spare people's feelings and to this end the word 'but' was to be replaced with the word 'and' - for example:

"You did that really well, Kevin, but ..." followed by a highlighting of mistakes. (Not good - too negative)

"You did that really well, Kevin, and ..." followed by positive suggestions for improvement(good - positively uplifting)

Of course, in the real world it's "Get that fucking brake on now, you twat !" as usual.

All of this is a good sign that we do not indeed live in a free public society.

What people say in private and what they do in punlic has become dis-jointed by ramapnt PC in overdrive.

As with all things socilist this will have terrible consequences for decades as people hide behind words and use non-offence as a reason to be offended.

As an example I highlight he muslim's who are get upset at anything that vaguely is rude about their cult. Now they have the lefties defending them too. We all suffer as their cause against us grows with support from people who should be on our side.

This is agood one when you are trying to hold couirt." Look I `ve got one thing to say...and it comes in three parts..."

From what I can gather the Independent should have ran the headline "We're not smear-merchants but..." The Left media are not going to go quietly.

Yes CU agreed , its offensive taking offence and we see it all the time !

How verrrry dare you !

Paul, yet again you have hit the mark and are quite correct in what you have written.

An interesting take on military life, I don't seem to remember it that way. However, If I ever heard one of my NCO's using language such as that Colonel Mercer advocated, he would be on his way to Colchester and once he was finished there on his way to civvy street.

Someone who has picked up a weapon for their country and is putting their life on the line, deserves better than to undergo abuse just because it is accepted banter. As Commonwealth and ethnic minority soldiers ae currently very important in keeping numbers up, they deserve better.