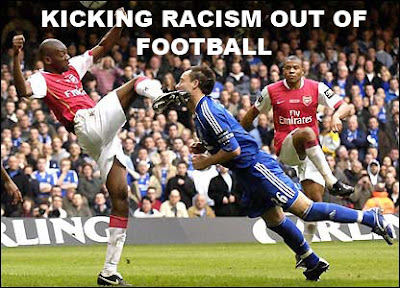 Update
I see my assumption that Blog people follow the rumour mill of football was unjustified some background then.Ahem ...prepare for careful phrasing. This was months ago but the rumours are persistent.

Apparently on the internet message boards it is alleged that John Terry told Ledley King to 'Shut up you lippy black monkey' before getting
sent off on Sunday. This would explain the following:
Why King went mad, when normally he is mild tempered and the incident appeared harmless
Why Chimbonda went berserk and had to be physically restrained
Why Zakora went mad also
Why Drogba, who was there and always gets involved, did nothing
Why Terry calmly walked away expecting to be sent off for what appeared on TV to be nothing

Terry was accused by Eto of making racist comments in the Barcelona game last year.
Apparently a Spurs player has leaked this, but Chelsea are working overtime to keep it quiet
Ashley Cole has said that Poll told him the lack of discipline by Chelsea was out of order and Chelsea are trying to discredit Poll, but
he cannot possibly come out and say what Terry did as he is the England captain, preferring to say he was sent off for 'ungentlemanly conduct'.
Finally, Rio Ferdinand said in his book that a current England player was a known racist. Wonder who he meant?

If this story is true, it will be massive and I can't believe the press haven't got hold of it yet. Chelsea must be weighing journalists out
left, right and centre.

I thought evryone knew this , next you`ll be saying you don`t think Robbie Fowler has a Cocaine habit ?
Posted by Newmania at 3:28 pm

Not being funny here, but the lad couldn't have placed his shot better for a knockout. Those of us versed in Chinese medicine (having studied esoteric work contained in the ancient Bubushi manual) will know that the foot was perfectly aligned with the Stomach 4,5 & 6 meridians - this would have also affected Triple Warmer 17 at the opposing jaw socket.


Betya didn't expect that from a train driver !

There is not a lot I have heard from you that I have expected exactly Kevin you are quite an unsual sort of person.

Then I tend to stick out a bit myself

Are you suggesting that Mr Terry is a racist??

heaven forfend ,......except that its about the most open secret in football.

Looking something up on it I `ll do an edit

I have certainly heard it alleged, but I hoped it wasn't true. Here's one I found while Googling the same topic:

Quote:
You are a soccer referee with a reputation for enjoying being the centre of attention and a habit of getting into bother and controversy. You send off a key player in a major local derby. You are slaughtered by the team in question, its manager and the press. Your capability and honesty are called into question. Your boss has to offer to meet the manager in question to try and placate him, much to the disgust of a dour Scotsman from the Manchester area. You are about to write your match report explaining why you dismissed the player. If you have heard the player make a racist comment, would you mention this fact in the report?

Graham Poll has the easiest of get out of jail cards imaginable - all he has to do is say "I sent Mr Terry off for using offensive language with racist undertones" and he's in the clear. He's applauded for having the nerve to dismiss the England captain in such circumstances. Snr Mourinho accepts that his captain's dismissal was justified. Terry is banned for 5 matches, dropped from the England team for 5 matches and offers a sincere apology for words spoken in the heat of the moment.

However, John Terry was dismissed for a second yellow card. I'd be stunned if a referee in such a situation only gave a player a yellow card for racial abuse when there's every chance that the opposing players are going to start yelling about it the minute the match is over. Not a word has been heard from Spurs.

It's not beyond the bounds of possibility that a hush-up is in operation, but that would destroy Poll, the FA and the whole reputation of the English game. Much easier to just deal with the player and the incident. The alternative is that Poll did hear something, only gave Terry a yellow and the FA are trying to save him - but again, I don't see why they'd bother as he's hardly the most popular of officials with his colleagues, let alone players & managers.

The funny thing is N - I'm not that unusual. I'm a qualified Driver/Assessor on the railway and have thus far helped to train 3 people with Masters' degrees - one of them (Tej Sharma of Silverlink) used to be a radio presenter for BBC World service (India). Bachellor degrees are now 10 a penny and a recent campaign for recruits at our depot attracted airline pilots - I kid you not !

The other day my guard used to be an ex geography teacher, before that my guard had a degree in archaelogy. One poor lad was told "Open that window you grotty little man !" by a poshly spoken lady - little did she know the poor sod has 3 science 'A' levels and couldn't get a job anywhere else.

One of the drivers in my link bayonett charged trenches in the Falklands (Marines).


Oh - one of my mates is a 5th dan in Kempo karate and does seminars world wide and is well renowned in the martial arts fraternity.

DO NOT MESS WITH TRAIN CREW !!!

PS, the ASLEF Journal ran a series of articles on the unusually well qualified people on the railway if you need to check out the archives - there was a chemist, pro-footballer and a merchant banker (not me, ha ha ha)

EK I read somewhere that driving the Eurostar attacts rather a higher starting salary than the average "grad" job...!

Ed not just starting but in between and finishing I think. Thanks for your bit thats very very interesting .

Kev I must admit I `m quite inpressed. Everyone here is thick , including me ..don`t tell anyone

I used to drive Eurostar (got to a Branson party when I worked there too). You need 2 years main line experience first (SNCF won't allow any less). The salary is circa 40k for a French validated driver, 42 if you go to Belgium as well. There is a daily meal allowance of 20 quid (last I knew). There is no overtime pay but 100% pension (your hours are 1900 pa but you are rostered 1700). When you join you will spend a lot of time shunting a North Pole depot near White City or seconded as I was on things like Heathrow Express or GNER White Rose services (maybe not now).

On my intake only 1 in a hundred got pass through the 2 week full time selection.

Not happy ? Not Rachel Ventura Brown (remember me telling you about her ?)


She/he is a cross-dressing Virgin driver. Nice bloke/girl actually, we met at Eurostar (no longer in contact I hasten).

(to the train driving thing not the cross-dressing thing)

Just find out all the recruitment departments of the different TOCs and send a CV regardless of whether or not they are recruiting.

Don't know where to find a list of addresses 'fraid.

37k basic after 18 month training (not sure how much before)

If you get a selection there's a right dodgy aptitude test to get through - speak to uncle Kev and I'll give you some advice. (lots of clever people fail it)

Oh - and if you get through all that you'll be on High Speed Trains.

But can you handle the 2am starts ? Roster changes ? Extremely unsociable hours ? Or keep your cool when you're trying to fault-find on a broken down train in the boonies and which is heaving with irrate passengers including Lord Barrington Fortescue-Smythe on his way to a summit ?

"Oh - what was that ? Tiverton Parkway ! F*** ! I was meant to have stopped there !" happens with the fog up to your windscreen 'fraid.

Can you handle the Fat Controller ??? (Look at the picture on The Hitch. Ha ha)

Like most jobs, there's MUCH more to it than you think and I've occaisionally seen graduates quivvering and sweating as much as anyone else. The 18 month training can be intense and you feel like you've been beaten up after some of the assessments. But it ain't brain surgery or warfare I grant you that. And the money ??? A piss take, but that's what the free market did post privatisation.

You must admit he has great thighs, I don't think he would take up cross-dressing.

Elee you and football have a strange relationship...

KEV I `m on baby sitting duty I `ll have to read you posts later,
Gotta go