One Faces Death One Does Not 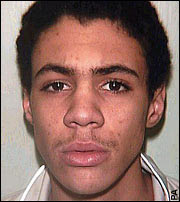 “
Bradley Tucker does not...meanwhile in Ohio....

DEATH Row Scot Kenny Richey (on death row) says he is confident appeal court judges will rule in his favour and release him. "Thankfully he still retains his sense of humour. His conviction was in Ohio 20 years ago for an arson attack that claimed the life of a toddler.”
This article: http://news.scotsman.com/scotland.cfm?id=488032007

.
. For some crimes justice will be served by no other means than the Death Penalty. It is not a matter of a strict balancing of the scales . I do not suggest we torture Rose West for years and then kill her ( which she deserves ) ,but rather a sacramental act showing that Society loves the departed ,not just the convenience of those who remain. There are problems of course .The most serious is perhaps the damage done to the executioner and the rest of us who by proxy We will become like Hamlet “The deeds creature “, dehumanised.
I think not .It is unpleasant for a soldier to kill, (ideally), but it is his duty . So is it ours to bear this burden , and the huge expence by the way. The problem of a miscarriage of justice is reasonable although exaggerated ,and non existent for the few cases I have in mind . There are about 40 people on real life sentences at the moment.They should all be dead for what they have done.

I don`t know that Bradley Tucker (the petty criminal who shot Peter Woodahams shoule be one of these , but lets at least make the victim a person.

In her statement,( Bereaved mother ) Miss Bowden, a classroom assistant, said: "Peter was the doting dad and Sam the daddy's boy. They were inseparable. Peter loved the time he got to spend with Sam, taking him to the park and on adventures, reading him bedtime stories.

"Sam believes that his daddy is a star now in heaven. It breaks my heart to hear him when he points up and says: 'Look, daddy is looking down on me'. When he has been given sweeties, he puts them down and will leave some for his daddy."

Murder is a special crime. There is no recompense and there is no recovery. Our penal and judicial system has slowly lost confidence in the rightness of punishment as a valid concept at all and our people be come more ignobly interested in empathising than rightness every day. We need a Death Penalty and we need Juries with the moral courage to convict. We must turn our backs on this selfish touchy feely all purpose sympathy which allows injustice to grow like a stinking weed .
Posted by Newmania at 12:49 pm

Suprise suprise I happen to agree with you , for the most heinous crimes hanging is the best solution for all concerned , the family of the victim(s) get closure and the killer is better off dead , 40/50 years in prsion is a living hell.
I have say that I would limit death to a certain band of killings
look at the sally clark case or that of ian and angela gay , imagine how we would have felt had they been topped?
Ian huntley?
Give me a sharp knife and open his cell door.

Well HItchbi think the point is that the systekm of jurisprudence stands between us and revenge and approximates Justice .

The image of the scale shows the difficulty of getting this right , not the supposed eye for an eye balance

I would happily walk that little fucker to a noose and hang him.
He has forfeit the right to exist.
He has done it , we all know that , he admitted it.
Hang him , it may give some other little shitbags something to think about.
There is no dignity in death , hang him in public before a large crowd of his "gangsta" pals and make them all walk past him and smell the piss and excrement leaking from his corpse.

Well I appreciate the sentiment but personally I would have the death penalty restricted to those who , now , would get life as in reall life .
This is not justice exactly but there are other considertions.

Why do they all make such a fuss , do they think we are going to live forever ?

I think the death penalty would solve a lot of problems. I think PH is correct in his belief that it's a deterrent and also that terrorists could not be traded if they're dead. Also, that it's a mistake to think that peadophiles can be rehabilitated, they should all fry.

They should all fry .......hmmm honestly Phillipa you are such a wishy washy Liberal..( gulp)

Im with Philipa
peados are incurable , hang all of them.

full circle Mr M, this is the topic you raised with me approx 10 seconds after we first met, if you recall, or was it 5

To touch on just one of ,000 aspects, the modern jury may not be up to your task: I served on one recently and some members (both m and f) admitted afterwards they cried when the perp (with a string of previous to his name, even his own Counsel said he couldn't claim Good Character) received ... a whole 12 months in the slammer

(not a murderer obviously)

Which brings us back to what we discussed before: absence of omnipresent God = absence of confidence with life'n'death issues

Hitch, you're a softy at heart. A 'sharp knife' for Ian Huntley - a pair of pliars is much more fitting, actually.

We now have DNA as a more reliable source of evidence. Gradings of murder would also mitigate the pressure on juries in grey areas, although these are the very areas that skilled advocates exploit.

As for trading terrorists ? Should we ever do this ?

Another point. Capital punishment does not deter truly evil killers, but it does deter unauthentic copycats.

Nick the image of the scales of justice , as I mentioned , is not of the false balance of an eye for an eye . It is of the difficulty of weighing the with fine measurements to approximate , you might say “discover” justice. Did you know that in the development of common law it was assume d that the law was there and it was not written it was “discovered “ or defined.
This difficult process of Jurisprudence is one we go through to approximate to justice and we err at all times on the side of a presumption of innocence. If you go to far here of course it becomes a callous disregard of the victim. That abandonment of the primacy of Justice has had dreadful effects and one of these , along with everyone lese is the emotionalising as in selfishly emoting of modern people .


I do not agree thna one single one of the pople curently never comong out of prison present any difficulty on the uncertaintly score which is hugely exaggerated . What about the victim the father and wife . Is it conceivable that with a rope on his mind he might not have shot .

It would change the way I felt about it

Nice to see you EK I agree with you but to me the heart of it is this . The victim dies say is tortured and more than one.

How can it be right that somone who did this is still alive. We imprison him , reform him and so on and we feel better about it but is it right .
NO


Actually EK I have noticed you becoming such a softy recently I was wondering if you had been Ellee-ised . Its always a danger , she is such a sweet woman.

I'd be happy to see a return to the death penalty _ with the added provisos that N mentions, plus, perhpas, DNA evidence.
In the menatime, perhaps we need to elect our judges? That would solve most of the problems with our criminal justice system. We'd at least get the justice we deserve! If people genuinely oppose the death penalty, surely they can see that the flabby excuse for justice we have now, (too few prison places, sentences too short and almost never served in full) actually encourages demands for the return of the DP. If 'life really did mean life' and all the rest, I suspect calls for harsher justice would be far more muted.

the main issue I have with bringing back the death penalty is the interminable appeals would make Cherie and her nasty lwayer ilk even richer.

I'm for capital punishment, N. In order of vileness - examples:

- for money
- for sex
- psycopathic
(all capital offences)

I'm unsure of the terrorist issue. Not softy, just eclectic.

the main issue I have with bringing back the death penalty is the interminable appeals would make Cherie and her nasty lwayer ilk even richer.

I don`t agree that it is the main issue CU but it is certainly one . The cost would be mountainous. Thats one reason why I only envisage it as a symbolic possibility for a very very few. Nick Drew is right it would in practice be difficult to get a Jury to convict .

The truth also is that it won`t happen I more feel that asking the question why not is a scalpel to some of the ways things are changing that I detest. Really the answer is that we prefer to avoid the duty to do right by the dead and it is easy and convenient to forget that they were ever here.

I would like the death penalty for pratty drivers that drive a foot from your back bumper. No trial no jury staright to execution.